There is simply too much to say about the Inca Trail. It was challenging, fun, rewarding, enlightening, tough and AMAZING, and we all fell in love. So this blog is simply a roller-coaster of emotions.

Back in January we had booked the original 4-day Inca Trail because we heard that it gets fully booked up, and we were right – it is now fully booked until September!! We booked with Wayki Trek, Wayki meaning ‘My friend’ in Quechua, one of the languages spoken in the Andes. Booking with Wayki Trek meant that we could get a free night in their hostel. So, aside from the smelly sheets and ice-cold showers, everything was going smoothy, until a human error on my part meant that we got locked out of our room the night before we were to set off on the Trail. It took about 5 or 6 men to push the door in, and then we were back to the smelly sheets and ice-cold showers!

Another perk of booking with Wayki was that we could choose to have an extra night visiting a little village that some of the porters live in. We happily chose this option and started the journey with three others from the UK and US by taking two hour-long buses out in the sticks, one of which about 16 people were crammed into, with only seven or eight seats available! It was a tiny minibus and was certainly an experience. The views outside the bus (if you could see past people’s heads) were breath-taking, and we were literally driving through the clouds.

Once we got to the village, we were shown around, gave bread to a group of children (bread isn’t available in the village and the kids looked as though we had showered them with chocolate), and then we went to the fields to help pick potatoes. Once we had picked some, we were allowed to try them as well, because they had a certain way of making them boiling hot under the ground. Mixed with an extremely spicy sauce, they tasted great, but we were all ever so slightly put off when Chups found a maggot crawling in hers!

In the evening, we had potato soup from the potatoes we had picked on the farm, and then we met some of the Inca Trail porters who lived there, and danced with them whilst one of them played his harp that he had made himself. The dancing was fun but it mainly consisted of stamping feet and squeezing hands and our time with the porters ended when their makeshift bench collapsed and they tumbled to the ground!

On the way back to our campsite, we passed by raging bulls and tiny little pigs, and tried to avoid the toilet which was a hole in the ground (like most toilets on the Inca Trail!). Once by the tents, we were underneath the biggest blanket of stars that I have ever seen in my life. It was incredible.

So, Day 1 of the Inca Trail. We were woken at 6.30am (late, by our standards at the end of the trip), and met four others from England and China who were to join us on the trail. After breakfast, we drove in the minibus for about 45 minutes to the trail head, and then sorted out our backpacks, hired sticks (I’m not sure I can walk without sticks, now), bought hats, gloves, scarves and socks for the cold nights ahead, and then stocked up on chocolate – it was so nice to see Cadbury’s after so long!!

Day 1 wasn’t so hard. The ground was mainly flat aside from a couple of steep uphills, and we stopped off at a couple of Inca sites on the way. We also squshed a special cactus bug to see what was inside – a bright red juice that they use to dye clothes with here! Walking along, we decided to have a lovely Disney sing-a-long to perk us up which was fun! Overall, it was probably the easiest day of the trail.

We were woken at 5.30am on Day 2 of the trail, and what we were told was going to be the hardest day. We bought coco leaves to chew (they’re legal here!) to help us with the uphill climb and the altitude. The climb was SO HARD.  There were endless uphill steps, and steps so giant they came up to our necks! (Okay, exaggeration). We had to walk uphill for pretty much 5 hours straight to get to the highest point of the trail – Dead Woman’s Pass. We started walking at about 7am and got to the campsite at about 1pm where we had to rest of the aftertoon free. I think all we did was nap until dinner time!!

Before dinner time, the chefs and porters introduced themselves to us, and we also introduced ourselves. They are about 12 porters ranging from the ages of 20 to 60, and I have so much respect for them. They carry about my weight on their backs and RUN the trail, getting there hours before anyone else so that they could set up the tents and cook the food etc. Their attitudes were great and they were always cheery and smiling and never once complained. We all literally fell in love with them.

I guess now is as good a time as any to mention the food – amazing! Lunch and dinner always began with an amazing soup, and then we would have lots of other things such as rice, pasta, pizza, chicken in sauce, other meats, avocado, potatoes, rolled chicken with spinach, and for pudding, apple pie, cakes, bananas and chocolate sauce – yum! Breakfast would be either pancakes or omelettes and we were always served the food by the oldest porter – Anhil – because the others were too shy to serve us, he said!

Day 3 of the Inca Trail also began at 5.30am, and we were already aching from Day 2 which is why I think that we found this day to be the hardest. We had to walk up and down endless steps right on the edge of a cliff for hours, and one minute we were singing, the next, we wanted to just jump off the cliff. Well, Soph did, anyway! She wanted to, I mean. She didn’t actually jump. Oh dear.

Anyway, we were told by the guides that Day 3 would be ‘Peruvian flat’, meaning it would be kind of flat, but not actually flat. This was a lie. We had to go up and downhill for hours and hours and it was not flat at all! Still, it was enjoyable and it wouldn’t have been good if it wasn’t challenging!

Halfway through Day 3, one of the guides, Antonio, took off mine, Julia’s and Soph’s sleeping bags and mats off our backpacks and told them that one of the porters, Elio, wanted to carry them for us for free because we looked like we were struggling! Oops. We did tip Elio though, and we’re so glad we did because we found out afterwards that he is trying to save up for university!!

At one point in Day 3, Soph and I literally got carried by the guide! We must’ve looked like we couldn’t cope! It was fun but scary because everyone apart from fellow tourists seems to sprint this trail! Also, the guide, Antonio, just loved to carry my camera and take lovely pictures of us struggling on the trail! We got to an Incan site on Day 3 which had incredible views, but a few hours later, Soph said something like “Weren’t we supposed to see an Inca site today?!” She didn’t actually realise that we had been standing on one…

As Day 3 was the last night, we hugged each of the porters and chefs goodbye and thanked them for everything. It was sad because we had spent a lot of time with everyone and we didn’t want to say goodbye!

The campsite at Day 3 was the only one where we could get a hot shower, and in the pitch black dark by torchlight, one of the youngest porters, Hyme/Jacob, walked with us for a good 10 minutes in the dark downhill and waited for an hour until we had all finished to come back up again with us! These porters are just too much.

Day 4 marked the last day of the trail and the one where we would finally reach our destination – Machu Picchu, the lost Inca city. We were woken up at 3.45(!) to get to Machu Picchu for sunrise, and we walked for about 2 hours in the dark to do so. I had fallen over twice before 6am, but the two hour trek in agony and literally climbing up the ‘Oh my god’ steps to Sun Gate was definitely worth the wait. Machu Picchu is simply amazing, and one of the best things I have ever seen. It felt so rewarding to finally reach this lost city that hasn’t even been known to the world for 100 years, after a long and hard four day trek. We spent a good couple of hours exploring the ruins and giving evils to the people who had taken the train and not done the trail (only joking….). 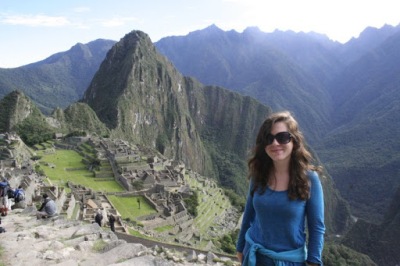 So our lovely group had a final meal together (which seems to have made Soph and Julia ill 😦 ), before we took the train and a bus back to Cusco. We three may have been last every day to each campsite, but at least we made it!

The trip ended nicely with Soph telling me the legend of the Troll on the bus back which literally had me in tears of laughter. One day you will hear this story. One day…

And back at the Wayki Hostel, we were greeted by the assistant chef who came with us on the trail, and we gave him the biggest hug ever before getting our bags and moving on. It was a lovely end to the trip, and all in all, it has to have been one of the best (and hardest) times ever!