Sorry I haven’t written a blog for so long. This is going to be another ‘super blog’, unfortunately. So brace yourselves!

Almost two weeks ago we were three hours away from the border of Bolivia, but it ended up taking a week to get there. We had to do a week’s detour through Chile to finally get to Bolivia, but it ended up for the best because the border is still shut due to protests, and we would probably have ended up living in Peru (which is not really a problem as we love it as much as the porters). 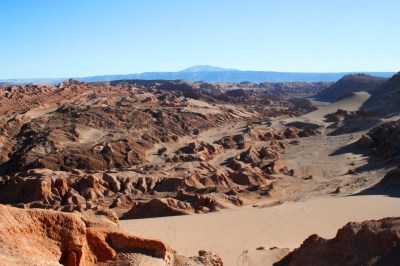 So we got a bus to the bottom of Peru, and then took a taxi over the border and into Arica, Chile! Arica is a nice city on the beach, and on our first day there, we saw an MJ impersonator, which was a lovely welcome for me into Chile. Other than sitting in squares, getting followed by a dog who we named after Bob Marley and going to the beach, we didn’t do much here. We did get surrounded by about ten young teenagers, though, who wanted to speak to us and practice their English (which seemed to mainly just cover ‘I love you’). Oh, and one of them asked for a kiss! I had to decline as he was about ten.

After a few days in Arica, we got an overnight coach to San Pedro, the driest desert in the world. Now this coach journey was the worst coach journey ever. It was freezing cold, we had to share one MP3 player, and they chucked everyone off the bus about three times to check our bags, including getting our big backpacks from the luggage compartment! Then at 7am we had to change buses. The only highlight of the journey was this amazing leg dance that Chups and I made up to Rihanna’s ‘What’s My Name’. We will make a video of it one day, because I know you are all dying to see it.

San Pedro de Atacama was boiling during the day and cold at night. Our hostel was full of cats and dogs which was fun, and I spent most of the time living my life-long dream of being a cat-woman and surrounding myself with about nine cats. One of them even clawed their way up me to get some ham that I had! I had missed cats though as South America is full of dogs!

We did one day trip to the Moon Valley which was interesting. The ground looked like the surface of the moon, and so I thought I’d do a little Moonwalk on it. Just because. At Moon Valley we also saw ‘Death Valley’ which is named so because there is no life there, and we saw a rock which looked like it was praying. Then we walked a little bit to the top of a sand dune to see the sun set, except we missed the actual sunset 😦 It still looked amazing, though! 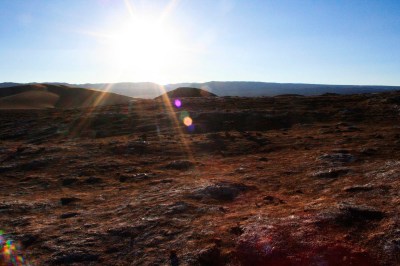 The next day, we rented bikes for half a day to ride around the desert in. I am not much of a cyclist and had to give up halfway and retreat back to the hostel, but it was fun while it lasted! I literally had not been on a bike for about ten years, so I’m amazed I managed to stay on it without falling off. The bumpy hill was fun to speed down, though!

So on Monday we set off for our 3-day salt flats tour at Salar de Uyuni, which would finally take us into Bolivia! On the first day we saw these incredible green and red lagoons which looked out of place in the landscape, and the green one looked as though it belonged in the Caribbean! Unfortunately, the water was freezing, but we did dip ourselves in a lovely hot spring later, surrounded by the amazing scenery and lagoons. We also saw some geysers which was really cool, as I remember learning about them in geography at school. 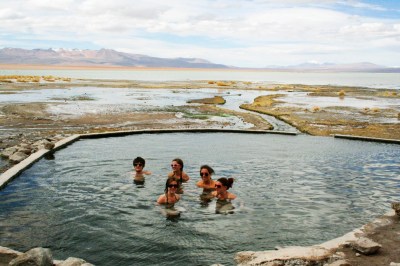 Our Salt Flats group consisted of people from Wimbledon and DMU. Now, what are the odds?! It was like I was at home! Well, apart from the alien landscapes… It was really cool to meet people who lived so near though and who went to my university. I must have walked past them before! We were destined to be united in Bolivia, clearly. The tour was in a 4×4 jeep which was fun and bumpy, and our driver, Paul, was not the friendliest of people, unfortunately, even though we tried to get a smile out of him! I think he just didn’t like us. Ah well.

On day 2, we saw a giant rock which looked like a tree, and was apparently in that shape due to the strong winds. We also saw flocks of pink flamingos on the lagoons, and of course, plenty of llamas (who were wearing pom poms as earrings)! We also drove through landscapes that looked like they were from another planet. I think we actually went to Mars for the day. 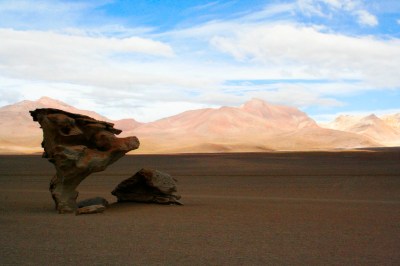 That night, we stayed in a hostel that was basically made of salt. The walls were salt, the ground was salt, just everything was salt! It was an interesting experience.

On day 3, we finally got to the Salt Flats – Salar de Uyuni. I have never seen a landscape like this before, and at first, the flats were completely flooded so we were worried that we weren’t going to be able to get out of the jeep! Forunately though, only the edge was flooded, and so it was quite cool that we got to drive through the floods as it looked like a giant mirror on the floor, or that we were driving through the sky! 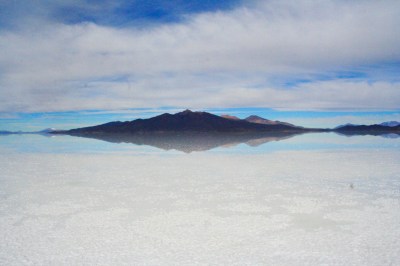 At the Salt Flats, we took some perspective photos as the ground is so flat and it is easy to do so. The salt looked like endless snow that wasn’t cold, and it went on and on for miles and miles! We had to wear sunglasses as the white was blinding. We also visited a little island in the middle of the flats which had giant cacti on it. The island looked a little out of place in the middle of this vast area of salt. 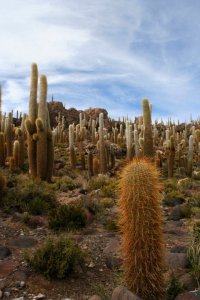 At the end of the tour, we were taken to the small town of Uyuni. We spent a couple of hours here, waiting for our nightbus to La Paz. We visited a train cemetery, which basically is an area of land full of junk and old, abandoned trains. So we climbed on top of those and got some photos, as you do.

So then we got the bus to La Paz, which is where we are now! Stay tuned for another blog, which hopefully won’t take as long!