Woops, I nearly wrote ‘dessert’ then…

Okay, so I am laughing already at the thought of what happened this weekend. I think that I can look back and laugh at it now. It was just one big JOKE, in a good way, and a bad way. Here it goes…

So we got a coach from Lima to Ica which took around nine hours, I think. All of these coach journeys are merging into one!! We hadn’t booked a hostel because none of them got back to us, so we planned to just turn up in Huacachina which is near to Ica, in the hope that one of them must have a spare room. We arrived at about 9pm and got a taxi to Haucachina. That was an experience in itself. Our backpacks couldn’t fit in the boot, so they had to go on the back seat, and I had to sit next to the driver. Throughout the whole journey, I honestly thought that he was drunk and that he was going to crash, because he was talking about going clubbing and saying we should get pisco sours and then he turned up the radio so that it was BLARING, and he kept looking at me and not the road! Then he turned on the light in the taxi, and he decided actually that he wants to turn it off so we can see the stars. Julia and Chups were laughing in the back whilst I had to have an extremely awkwards and broken Spanish conversation with him! Oh dear.

Once we had arrived in Huacachina, we traipsed around trying to find a hostel, but because it was the Easter weekend, which is very big here, absolutely everywhere was full! We were told that not ONE place had a room, and it was dark and we were tired, and we had no idea of what to do. Luckily, we got rescued by a woman who worked at a tour company. She brought us into the offices where we met a man named Brian who told us that we could sleep on the floor of the office for free!! The only problem is, we’d have to wake up very early as he had people coming for a tour at 6.30am! So we agreed, and he stole us a mattress from somewhere. Oh, it was funny. All three of us squished on this mattress and let’s just say, I didn’t sleep much! And the tour people arrived whilst we were still lying there and were laughing at us and took photos!

This is the office that we made our home for the night: 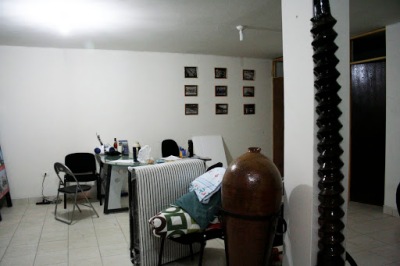 The next day, we thanked Brian and booked a tour with him. We got up early and saw Huacachina in the daylight, and oh my, it must be one of the most beautiful places I have ever seen. It is a little village based around an oasis in the middle of a mini desert and it really is just a lovely place. So we had booked a sandboarding and buggying tour for the afternoon, which was definitely the highlight of the weekend! The buggys seat around twelve people and they roll over the sand dunes for about an hour, soaring down them at high speeds so that it was literally like a rollercoaster! We screamed, bumped our heads, and Soph lost another pair of sunglasses to nature! Afterwards, we were COVERED in sand! Oh, and in the middle of the buggying, we stopped to go sandboarding, except we just laid on the boards and got pushed down the dune by the driver! Ahhhh it was sooooo much fun!! Sand went everywhere, but it was completely worth it.

The next day, we took a boat tour to the Ballestas Islands which have sea lions, loads of birds and even penguins! It was fun at the beginning, but then I threw up. I don’t have good sea legs 😦

Our hostel in Hucachina deserves only one sentence, and that is that it is the WORST hostel EVER and no one should EVER stay there unless they are MENTAL. We only stayed there as everywhere else was booked!

Now we are in Nasca!

One thought on “Sandboarding and Buggying in the Desert”