I am extremely tired, so this post may drag your eyelids down with mine. Lo siento. Get me. I know Spanish.


Okay so a week ago (oops, I have been slow with these blog posts), we got a nine hour coach from Mancora to Trujillo which evolved into a horrible twelve hour coach that stopped every five seconds. Needless to say, I have had better journeys in my life. Actually, the next coach we took was THE best coach journey of my life, but more of that later.


So we arrived just before midnight and got a taxi from Trujillo to the nearby coastal town of Huanchaco, and were met by a loud crowd spilling out of the hostel with thumping music blaring – not really want we wanted after our long journey! We squeezed our bags through the gaps in between people to find our room, and tried to get to sleep. The music died down shortly after though, so that was okay! Yes, Mancora wore us out and we are now grannies who like a good nights’ sleep (and knitting and a cup of té).

Huanchaco was a really lovely place, again full of surfers. Every second person will ask you if you surf! No, I don’t. It does look fun but it’s not really my thing. After visiting the beach on our first day, we were all a bit hungry and could smell an amazing aroma of cakes coming from nearby. So, we turned into dogs again (is this meant to happen more than once?!) and sniffed our way, literally, towards the cake shop! It paid off as this cake shop certainly could rival the cake shop that was my very first place of work – Suzelle’s! Although I think Suzelle’s wins 😉

On the Saturday, it was Julia’s birthday! Firstly, we had birthday breakfast, then a little birthday doze on the beach, a birthday sunbathe, a birthday paddle and of course, birthday cake!! Then we got Julia birthday DRUNK and found the most happening place on the beach so Julia could throw some birthday shapes. SUCH FUN!


The next day, the other two were hung over after boogying with the Peruvians, and I wasn’t feeling my best, so we didn’t do much! In the evening, however, we were disrupted by a VERY drunken Swede named Jon, who decided to eat dinner with us. Oh, and he ate Julia’s dinner too, pretty much. It wasn’t funny at the time, but I guess it is now!

In the evening, we took an overnight bus to Peru’s capital, Lima, home to one third of the whole population of the country! Okay, so this bus was just…I have no words. It was AMAZING, and not particularly expensive at all. We got blankets, two meals, televisions, hot drinks, loads of legroom, seats that went all the way back, and an air hostess! Well, maybe I should call him a coach steward, but he was pretty much an air hostess. I had never seen anything like it before! It was so much like a plane. But better.


Here is a pretty picture of a Lima sunset. Yes, I need a break.

We arrived at our hostel at 7am, and thankfully the room was empty, so we went straight to bed again! It was very hard to sleep with the air hostess fussing all around us. The part of Lima we are staying in is called Barranco – a really nice quiet area right by the sea, with lots of good bars and restaurants. We explored Barranco on the Monday, and then on the Tuesday, we went on a bit of a crazy shopping spree. We first went to Mercado Indio – a market selling indigenous crafts and materials, as well as bags, alpaca jumpers and lots of amazing stuff! We went a bit out there and each got an alpaca jumper. I also got a bag which I love! Then we went into the modern part with the department stores and shops. I bought probably a little too much, but everything I bought, I needed. Honest.


So in Lima, we have just been exploring. Today we went to central Lima and the old part of town, which is a lot different from the rest of the city. It was blazing hot so we sat in the square (one of many that we seem to sit in) with ice creams to watch the world go by. A man came up to us with a leaflet with a big question mark on it, and he was pointing to the sky and talking in very fast Spanish. We didn’t really know what he was saying or what he wanted, so we took a leaflet and Soph decided that he must have been talking about aliens. On further inspection, Julia noticed the Bible passages and realised it was a religious leaflet! DUH. We were surrounded by Cathedrals, this weekend is Easter, but Chups’ first thought was aliens! That kinda killed us. 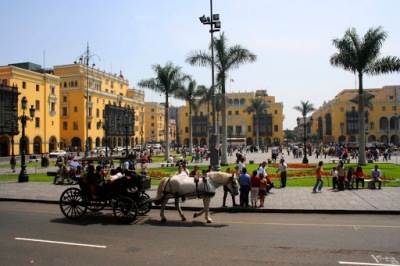 In Lima we have also drank Pisco sours, attempted to go paragliding numerous times (the wind just isn’t good, apparently) and played several bad games of pool. We are leaving tomorrow afternoon for Huancachina, a desert with sand dunes that you can go sand boarding on!