It was always on my bucket list. What could be more thrilling and exhilarating than free-falling through the sky at speeds of up to 200km per hour?! I was one of those crazies who knew that I wanted to skydive one day, but I never made the efforts to actually make it happen. That was, until I saw it with my own eyes.

I was enjoying a jet boat ride on the Clutha River in Wanaka, New Zealand, and towards the end of the ride, I saw tiny specks floating through the sky. Upon closer inspection, I could see that these specks were in fact skydivers who were drifting down towards solid ground now that their parachutes had popped open. Almost immediately, I felt that I had to experience what these people had just experienced, so I did what came naturally to me and booked my tandem skydive that very day for the following morning.

I was terrified, but I felt ready to throw all my worries (and myself) out the window by jumping out of a plane. I knew that with barely any time to think it over I couldn’t talk myself out of it, and I could feel the excitement bubbling beneath the fear. The next morning however, I woke up to a sight I hadn’t prepared for.

A carpet of thick clouds were hanging low over Lake Wanaka, and after days of sunshine it felt as though they were mocking me. A sinking feeling surfaced in the pit of my stomach – not quite the same as the one that I was hoping to get skydiving – and I rang up Skydive Wanaka to check if my 11am drop would still be on; I was determined to do it that day. However, I was told that the clouds would make it impossible to skydive safely and to call back in an hour to see if things had changed. By midday, there was still a blanket of grey cloud looming over us and after being told I had to wait a few more hours, I gave up and drove to the next destination – Queenstown.

Once in Queenstown, I felt restless and disappointed. I tried to forget about it but decided to call one last time after I had already cancelled my booking, and was told that I was in luck – the clouds had completely cleared and they could fit me in at 4pm that day! So I drove back along the winding roads to Wanaka to finish what I started.

Lake Wanaka the day before my dive

It turned out to be a beautifully sunny afternoon. I arrived racked with nerves and was first weighed before slipping into the Skydive Wanaka bright orange jumpsuit, and it wasn’t too long before I was outside with eight others, harnesses and goggles on, meeting our ‘beautiful strangers’ – mine was the calming and friendly Simon. We then tentatively walked towards the tiny plane we were all about to plummet out of.

We were all sitting nervously on the benches on either side of the plane when the next minute, it was soaring up through the air. It then suddenly dawned on me that I had never before been in a plane without having to wear a seatbelt or hearing a safety briefing. The views out the window over the lake and surrounding areas were so incredible that I almost forgot what I was about to do for one minute – that is, until the door to the plane opened and people started jumping out!

I had been briefed thoroughly and was secured tightly to Simon who told me this was his seventh jump of the day. That didn’t stop me from spouting a series of profanities as we inched along the bench to the door, ready for our turn to take the plunge. 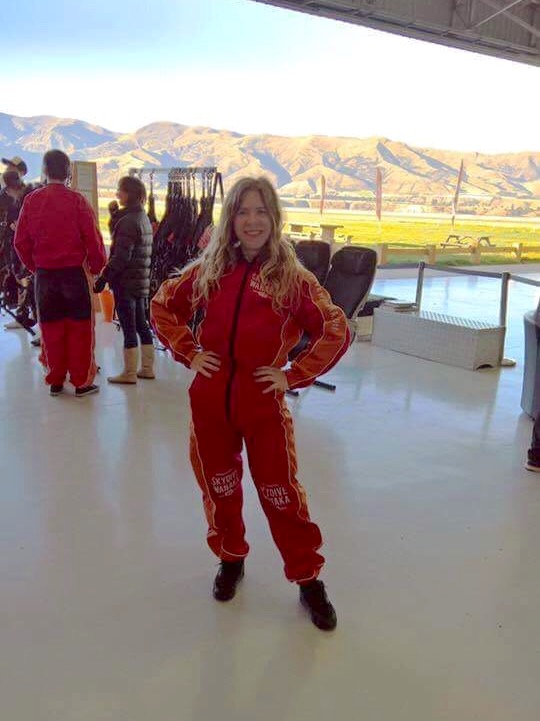 Me just before I jumped

As we hung out of the plane door, it felt like time was going extra slowly, and I was willing Simon to just jump! As soon as he did, I felt the sudden drop feeling felt on big roller coaster dips, but this was almost immediately replaced by a floating sensation. It felt all so surreal to me that my brain couldn’t quite compute that I was falling through the sky, although I could barely even reach my hand out in front of me to give thumbs up due to the pressure of the wind!

About halfway through the fall, my mind suddenly switched to the fear of ‘what if the parachute doesn’t open?’ Of course, it did snap open about 30 seconds later, and then I felt relieved, exhilarated and a bit saddened that my freefall was over. Gliding down to the ground was fun in itself though, and I was allowed to steer the parachute myself which was almost just as scary as falling through the sky! Once I had landed, I just wanted to do it all over again.

It is simply one of the best things I’ve ever done. If you want to experience an adrenaline-inducing activity like no other, then you’ll love it too. If you don’t fancy taking the plunge and risking it all for a 45 second thrill, then maybe stay on the ground. But I promise you, it’ll be worth it…

Who I booked with: I booked my Skydive Wanaka experience on Bookme.co.nz which is a discount site for New Zealand

Free fall time: I jumped out at 12,000ft which meant I was freefalling for about 45 seconds

Length of overall experience: From start to finish it was about 1.5-2 hours